UPRISE IN ALBANIA : Why is the Balkans burning? 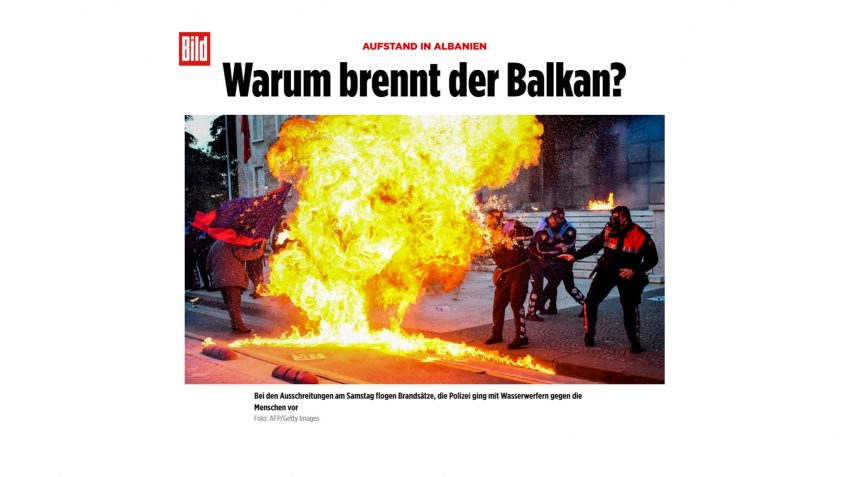 Burning incidents, smoke bombs, riots on the streets, mass demonstrations every week: The Balkan state of Albania sinks into chaos.

In recent days, there have been street battles in protests against the Albanian government in the capital Tirana.

Demonstrators of the opposition threw Molotov cocktails, bangers and paint bags against the office building of Prime Minister Edi Rama. The police used tear gas and water cannons against the humans. A dozen policemen and several demonstrators were injured.

What’s going on in the Balkan state?

It is now becoming apparent to the rest of the continent that something is seriously wrong in the land that was completely isolated under the Stone Age Communist Enver Hoxha from 1944 to 1985. The EU decided in 2017 to begin accession negotiations with Albania this year.
Ironically with Albania! Ironically, with a mafia state!

Albania is a prime example of a chaos country in the hands of a gangster: For less than a year, the opposition has withdrawn from parliament – in protest against corruption and votes by the government. For two years there is no constitutional court – the old constitution is over, a new one is not put into effect.

President Rama has had to dismiss two Interior Ministers in the past few years: Fatmir Xhafaj is strongly suspected of being part of the drug mafia that is in the hands of the country and half of Western Europe! Samir Tahiri is currently under indictment – only politics can still have a lawsuit

And Rama himself? The Prime Minister is regularly associated with drugs himself. Thus, the opposition accuses him of having bought drug votes with drug money. A recording of a telephone call should prove this.

▶ ︎ Accordingly, on September 11, 2016, Rama called the head of a regional electoral authority to inquire whether everything was over in the elections “as discussed”. The response of the election leader: “Yes, boss, everything as discussed.” The case is known in Albania as “Case 184”.

The government protects the mafia.

The accusation of vote-buying even raises Rama’s former Justice Minister Yilli Manjani. Manjani, a respected law professor, to BILD: “Different international organizations have confirmed that there was mass vote buying.”

The ex-minister sees behind a joint project of Rama and the mafia: “The government protects the mafia and allows their drug business. In return, the gangs and clans are buying voters’ votes for the government. ”

Manjani had once demanded an anti-drug war – and even the use of the military in the NATO country Albania not excluded. He was released in January 2017 for this.
Revelation journalist Basir Collaku said: “Under Edi Rama, we had an explosive spread of drug production in Albania.” According to Western intelligence estimates, more than 70 percent of cannabis sold in western and south-western Europe comes from Albania.

The police leadership is considered corrupt.

The Albanian police itself is considered highly corrupt, especially the police leadership. Parts of the management are under suspicion of mafia – for clues from abroad.

Albanian policemen who actually investigate against politics and police are imprisoned or put under house arrest. In Switzerland, Italy, the Netherlands and Finland, several senior police officers have received political asylum.One of them is Dritan Zagani, former head of the border police of the Vlore region and investigator of the anti-drug police. Zagani was held in solitary confinement for half a year and then in house arrest after telling his superiors about concrete evidence of the drug trafficking of his then Minister of the Interior, Samir Tahiri. He was finally able to flee Albania with his family thanks to Italian police and agents.

His conclusion to BILD: “My country is a mafia state. It is ruled by the mafia. ”

But somehow, says ex-Justice Minister Manjani to BILD, interested in political Europe hardly anyone. It goes without saying that Chancellor Angela Merkel recently welcomed the leaders of the Balkan states in Berlin for the Western Balkans Summit – including Albania’s Prime Minister Edi Rama.