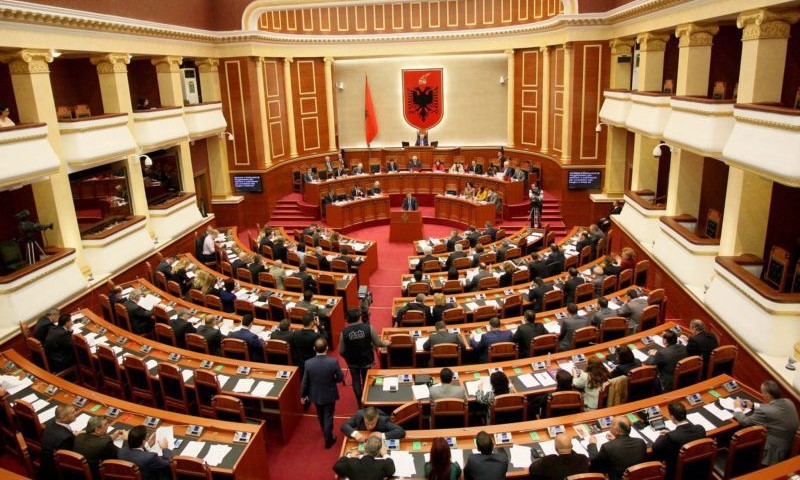 On 18.12.2017, following the proposal of 28 MPs, the ruling majority of the National Assembly appointed a new Temporary General Prosecutor whose mandate is indefinite [1]

According to the Constitution [2]

However, even Article 109 of the new Law on the Prosecution was implemented only partially by the majority. According to this provision, to be appointed as a Temporary General Prosecutor, the candidate must have had successfully passed the vetting process [4]

The second important finding, is that the decision for the appointment of the General Prosecutor (whether temporary or not), can’t be approved by a simple parliamentary majority, as the Constitution enforces a mandatory qualified majority vote. As article 109 of the Law on the Prosecution doesn’t detail the majority level upon which the appointment shall be approved, it is solely the Constitution that should be applied as a consequence [5]

The Voting of the Temporary General Prosecutor by a simple majority is also against broadly accepted European standards .The Venice Commission has set several international standards with the objective to eliminate the possibility of the politicization of the prosecution body. Specifically, the CDL-AD (2010)040 “Report on European Standards as regards the Independence of the Judicial System: Part II – The Prosecution Service”, recognizes only two models of how the independence of the prosecution body can be achieved: (i) The interaction between two different constitutional bodies (President – Assembly) [7]

The election of the Temporary General Prosecutor , contrary to the Constitution, by only one political party in the Assembly, without any co-operation with other constitutional institutions (such as with the President of the Republic, as it was before constitutional changes), or with other political groups within the Assembly (through a qualified majority of 3/5, as the Constitution envisages currently), not only contradicts the Constitution and international standards, but it’s without any doubt a huge retreat in the efforts to guarantee the independence of the prosecution body and eliminate the culture of impunity. This is the first time since the entry into force of the 1998 Constitution, that the General Prosecutor is elected following a unilateral procedure, with a candidate representing only one political party in the Assembly. This implies the full politicization of the prosecution body and defacto the appointment of the prime minister as chief prosecutor. The Government effort to put under its full political control the prosecutor’s office, even temporarily, coinciding with the numerous investigations by the prosecution of senior officials of this majority, is without any doubt the greatest threat to the rule of law in Albania, the end of democracy in the country and the destruction since its early beginnings, of a two-year effort to Reform the Albanian Justice system.

87. In order to provide for guarantees of non-interference, the Venice Commission recommends: 1. In the procedure of appointing a Prosecutor General, advice on the professional qualification of candidates should be taken from relevant persons such as representatives of the legal community (including prosecutors) and of civil society. 3. The use of a qualified majority for the election of a Prosecutor General could be seen as a mechanism to promote a broad consensus on such appointments.”