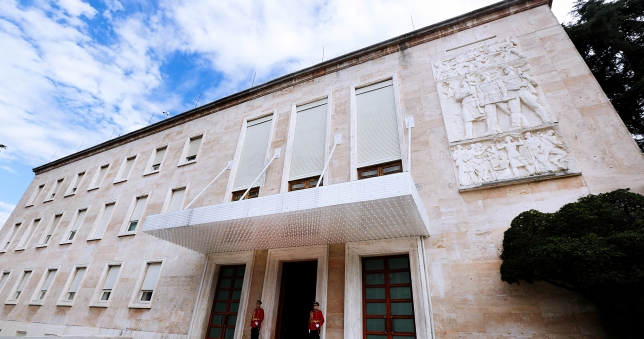 After Rama’s and Interior Minister Xhafaj attacks on the Prosecution following their request to lift Tahiri’s immunity, DP leader Lulzim Basha called on Monday, October 23rd, upon the EU Commission and US Government to put pressure on Prime Minister Rama and his ruling majority to immediately interrupt his campaign of threats and pressure against the justice system aiming to make justice officials submissive and guarantee the impunity of politicians who have been publicly exposed as linked with crime.

The next day on October 24th, target=”_blank”>”Joseph Daul”, the President of the European People’s Party in a clear reference to the Tahiri case stated that “Albania’s EU aspirations will be taken seriously only when rule of law, independence of justice and fight against corruption are applied. Drug crimes in Albania are a major problem that obstructs its EU path. Real efforts must be made to fight these crimes with full transparency”.

Asked on Wednesday, October 25th, during an interview for the “Voice of America” TV channel following the earlier vote of Rama’s majority against the lifting of Tahiri’s immunity, the US Assistant Deputy Secretary of State, Mr. target=”_blank”>”Hoyt Brian Yee”

“Frankly I can’t speak on individual cases but however we trust in some principles.

First the law should be applied equally to everybody; no one can be above the law; no one can enjoy immunity from the law. We fully support prosecutors and judges who conduct the investigation wherever it leads, in the higher or lower level of government. We don’t believe that individuals have to be targeted because they belong to one political party or another. But the main principle is that nobody should be above the law.

There has been no public statement on the Tahiri case from the EU Delegation in Tirana or Brussels. The EPP Women President and former Rapporteur on Albania in the European Parliament Mrs. target=”_blank”>”Dors Pack”

Mrs. Vlahutin and other European/Western diplomats in Tirana have been criticized by many politicians, civil society and public personalities as of their silence in front of the pervasive cannabisation trafficking surge in the country and obvious links between government and police officials `and drug lords while frequently speaking publicly on less relevant issues and pretending general progress with the rule of law.

The reactions so far dealt with the political aspect of the case i.e attacks and threat on the prosecution and refusal to lift full immunity of the indicted suspect and not with the judicial criminal case per se.