DECLARATION BY THE CHAIRMAN OF THE DEMOCRATIC PARTY, LULZIM BASHA. 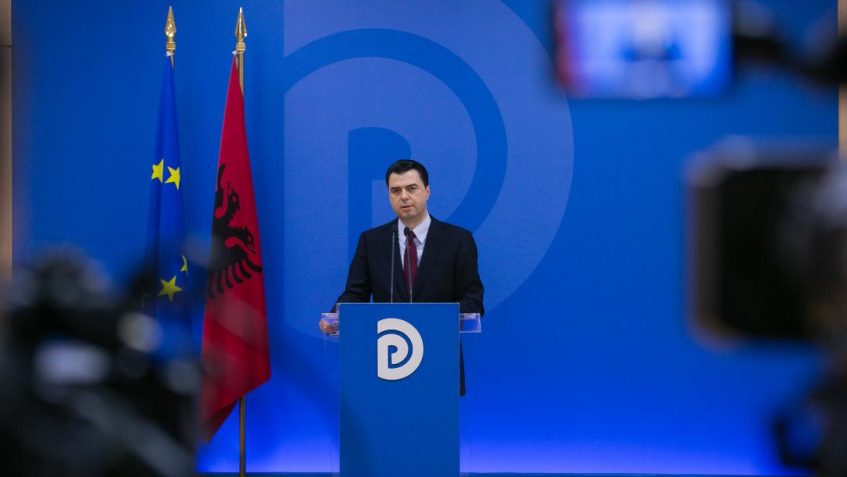 It is a blurry, disturbing and confusing political period for Albanian citizens, so I want to share with you some truths and thoughts.

I want to say two certainties from the beginning:

– There will be no local elections on June 30th.

– No one will dismiss the President of the Republic.

Edi Rama is trying to bomb with two promises the public opinion, which he cannot bear, nor does he have any interest to prove:

-He is also vowing to launch procedures for dismissing the President.

Both are bluffs and noisy statements with the intent of distracting your attention.

Edi Rama is seeking to set up a telenovela made of electoral and presidential drama, hoping that people will forget the fact that Astrit Avdylaj is de facto the chairperson of the Socialist Party of Durres, the mayor of Durres, the chief Police, the chief custom officer and chief tax officer of Durrës.

This is the most important political fact of the last six years: the fact that proved the merger into one sole body, of crime, of the Socialist Party and of the socialist government.

While being in opposition, I would have loved to be involved much more on public policy issues, on development programs and laws, on decisions that help the economy and our people; I would have loved to do so rather than the daily struggle against crime, drugs, and a government that has merged into one with crime.

But my persistence and fight against crime and drugs are an attempt to awake our society, from the disregard towards the risk organized crime and drugs have posed to us and to our future.

Because when drugs and crime enter politics, there is no place for politicians working for the people.

Because when drugs and crime enter the economy, there is no place for entrepreneurs and honest people.

In a country where criminals rule, there is no future for children.

My battle and that of the Democratic Party is a battle for you, a battle for the future of Albania’s children.

It was Edi Rama who brought into politics crime, drugs and the evil side of crime.

Since some Socialists want to talk today on the dismissal of the President, I have a question for them?

Who will judge and dismiss President, Damian Gjiknuriwho wanted to clean up 30 million euros on behalf of Edi Rama, falsifying official US government documents?OrArbenAhmetaj, representative of an international waste mafia clan? Or Taulant (Balla) of Bego and Toyota Yaris ?!

It is neither up to me to judge the President’s decision, though I fully support him.

Politically, I can say that monist elections are not elections.

Politically, I can say that the constitutional and responsible decision of the President serves the people and public interest.

Beyond any individual opinion, there is one, and only one institution that can express itself on this: the Constitutional Court.

Edi Rama has proudly and arrogantly destroyed this Court – as he has also destroyed the High Court – and today it can’texpress itself.

But, it’s clear to everyone, that in today’s conditions, there are no means that people’s will can dictate through free and fair elections the parliament and the government.

Not before Edi Rama leaves as a Prime Minister, and not before Vangjush Dako, Damian Gjiknuri and dozens of socialist officials and their criminal associates go to justice for stealing Albania’s elections, for destroying the foundation of a democratic order.

My efforts, the Democratic Party’s efforts, do not aim a table bargain or a negotiation of any date. Our fight is a fight for the freedom of voting.

What I, and hundreds of thousands of citizens are asking for, from our country, our society, is the minimum, but irreplaceable standard of any democratic society: the right for Albanians to decide according to their free will, who would govern them.

I know that for many citizens, it is terrible to become a witness to such a difficult situation. I am sorry for this. However, I want to tell them, everything is being done for a better day.

The only environment, where people’s lives and fates can grow, is a society where politics is free from crime and corruption, and where people’s free will determines what government will rule upon them.

This is what I believe; this is for what I have fought every day, every moment for the last six years: people’s free will and a politic model in the service of this will.

For these, I am willing to talk, to discuss, to work. For nothing else.

Apart towards every Albanian, I personally have a great obligation towards thousands and thousands of citizens and Democrats who have been protesting during these recent months without being discouraged by any violence, poisonous gas, arrests, terror, and propaganda.

I express my deepest gratitude and I am inspired by your courage.  Like towards to any Albanian, who has supported us, in every possible way.

Our fight for Albania like all Europe continues with determination.No steps back, until the triumph of democracy over this narko-state.

Many are in anxiety relating to what will come, many unjustly who are divided into “us” and “them”, expect what will happen.

What I want to guarantee today to you, is that at the end of this battle, Albania will win, Albanians will win and take benefit of, the just values, freedom and democracy will prevail.

We shall talk openly, some will lose, but they are just a handful of corrupt rulers, oligarchs and criminals who decide today for everything and get everything.

Enough with a country they want, now is the time for Albania for all Albanians.

God bless Albania and Albanians wherever they are!