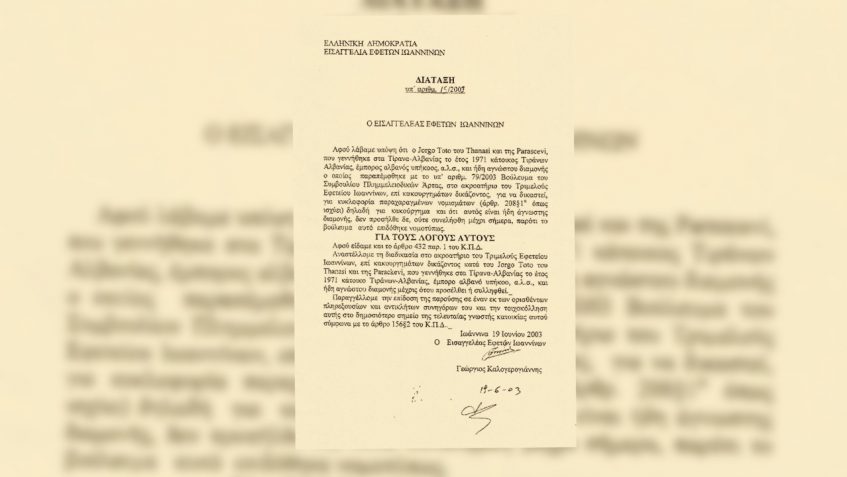 Edi Rama has been silent for several days trying to rescue his candidate for the city of Vora, Agim Kajmaku, through various machinations and man-oeuvres. He is doing so in order to avoid to answer on the Greek justice file of Kajmaku, on his obligation to immediately resign from his mayoral position and to confront Albanian and Greek justice.

Agim Kajmaku’s file represents the second case denounced in a month by the Democratic Party based on concrete facts and documents, proving how Edi Rama’s mayoral candidates have committed crimes and how they have hidden them.

By remaining silent, Edi Rama proves his culpability and his impossibility to face the truth. Co-operation with crime appears clearly to be at the source of his power.

During these six last years in power, Edi Rama has proven to be the Prime Minister who promoted in politics and public administration over 300 individuals with criminal records. These being from murderers and rapists, to drug, women and human traffickers.

Edi Rama remains silent despite receiving full information that Agim Kajmaku alias Jorgo Toto has cheated with his Decriminalization Form. This, because being a person with a criminal record, by law Kajmaku can’t exercise any public office, including that of the Vora Mayor.

Edi Rama represents a structured criminal group that should go behind bars instead of running the Albanian government, its ministries and its municipalities.

Edi Rama, being the Prime Minister of the country, had all the ability and the resources to verify any data for any person within minutes. Rama’s excuse that he didn’t know, that he is not responsible for others – or that Agim Kajmaku, like Valdrin Pjetri, should be held individually responsible – is mere propaganda.

Agim Kajmaku was appointed candidate for the Municipality of Vora based on the signature of Edi Rama and with the insistence of Belinda Balluku. Edi Rama had all the institutional opportunities to learn, within minutes, the truth that every socialist member in the city of Vora knew about Agim Kajmaku’s criminal past.

In fact, Edi Rama knew it, but he hides from his responsibilities in the hope that the truth will not come out and that his corrupt “Katica” (in reference to the Macedonian Prosecutor arrested for corruption) in the Albanian General Prosecutor’s Office will defend him.

Instead of immediately distancing himself from Agim Kajmaku, Edi Rama remained silent and ordered him to lie to the citizens of Vora, promising him protection from justice.

The media has transmitted the allegations of Jorgo Toto (Agim Kajmaku), claiming he has no issues with the Greek justice system.

This is a lie.

A similar lie was also the one published few days ago, when Edi Rama’s candidate in the Municipality of Vora, as Valdrin Pjetri of Shkodra did, issued a criminal record file to deny his problems with the Greek justice system.

The truth is that Agim Kajmaku alias Jorgo Toto is a person with serious criminal precedents.

Despite DP’s request for his penal profile to be verified, and given the fact that the Albanian general prosecution office is dragging the case – just as it did with Valdrin Pjetri’s case for whom there is no official response yet – the Democratic Party is presenting authentic evidences of the criminal record of Edi Rama’s candidate for the Vora Municipality.

Attached, the decision of the Prosecutor’s Office and of the Court of Ioannina dating June 2003. According to this official document : 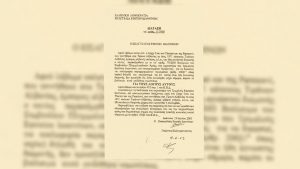 The crime was committed during a transaction to purchase seeds and other plants. Agim Kajmaku used the false identity of Jorgo Toto – fatherhood Thanas and motherhood Parashivi.

After being questioned by the pretrial investigator, and having spent several days in jail, the judicial police officer decided that the investigation against Jorgo Toto should be conducted under the “obligation of appearance”, until the case was transmitted to the prosecution and court.

After the file was transmitted to the prosecution, the Ioannina Prosecutor’s Office found that they were facing a first-degree crime (the heaviest degree as of the penal classification), and from the assessed evidences, it was proven that the crime was committed by Agim Kajmaku, alias Jorgo Toto.

The crime committed by Agim Kajmaku, alias Jorgo Toto, according to the Greek prosecution, should be sentenced to not less than 10 years in prison.

The court decision to arrest Agim Kajmaku, has not yet been executed , because during the trial, he achieved to flee the Greek state and to escape to Albania.Once here, he changed the identity from Jorgo Toto, the user of counterfeit Greek money, to Agim Kajmaku, the right businessman for Edi Rama’s criminal policy.

According to Greek criminal law, the court has suspended the trial until the sentenced individual is arrested or given an accurate address to communicate the charge. According to the Greek law in this type of trial, the citizen must be present at the trial, because it is considered a serious crime.

We reiterate that the Greek court’s arrest warrant has not been executed, as Jorgo Toto was not found in Greece.

According to the official documentation of Greek authorities, it turns out that Agim Kajmaku, alias Jorgo Toto, has evaded the Greek justice system to face a charge that carries at least 10 years in prison. He has never executed in jail his sentence and has never been acquitted on the charges brought by the Greek Prosecution. So he is practically still being prosecuted by the Greek authorities, as of today, with a measure of “jail arrest” in place.

All these evidences prove that Agim Kajmaku is subject to a ban on exercising a public function according to the decriminalization law.

According to this law, they can’t run for, nor get elected mayor, those individuals who have been subject to a jail arrest or other personal security measure in one of the European Union countries, and in the specific case, in Greece.

For this category of individuals, under the law of decriminalization, the prohibition to run for office, to get elected or to exercise a mandate lasts until there is no acquittal in his favor. Such prohibition is also valid when the relevant personal security measure has been withdrawn, but there is not yet a court decision regarding the fact if the individual is guilty or not.

Although he is fully aware of the issues with the Greek justice system, Agim Kajmaku’s insistence on his lies, proves that he is protected at the highest level of power. With his silence, Edi Rama proved that he is the defender of Agim Kajmaku, whose candidacy proved once again that he is inextricably linked to crime.

The Democratic Party demands the Albanian prosecutor’s office to immediately initiate criminal proceedings against Agim Kajmaku, for the crime of having falsified the Decriminalization Form.

The Democratic Party is asking the Albanian prosecutor’s office to immediately inform Greek law enforcement authorities that Jorgo Toto’s, alias Agim Kajmaku, new address, with the blessing and assistance of Edi Rama, corresponds to the office of the Mayor of the city of Vora.

Edi Rama and his corrupted “katica” in the prosecution office may hinder or delay the official release of the case, but they will never succeed imposing on Vora and its citizens, a felo Mayor, part of the underworld and a proven counterfeiter.