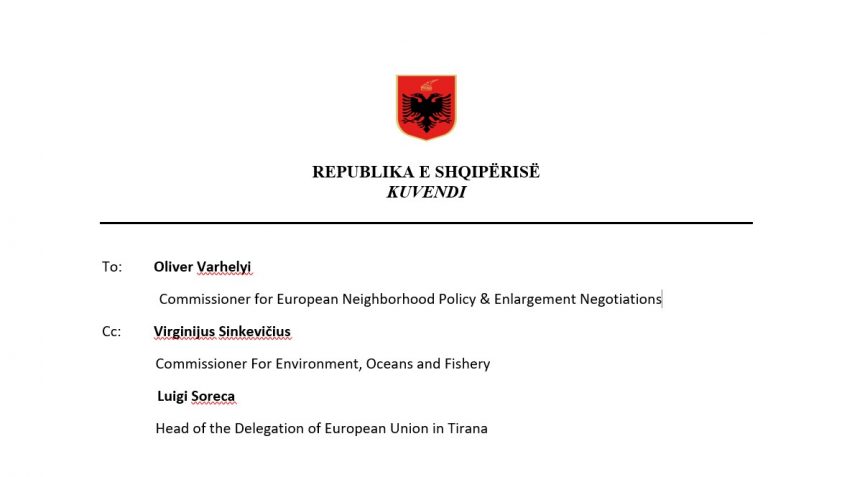 The Democratic Party has sent a letter to the European Commission regarding possible infringement of EU law in the case of Vlora Airport project. The letter was signed by the MP Jorida Tabaku, Chairman of the Committee on European Integration and MP Helidon Bushati, Deputy Chair of the Committee on Productive Activities, Trade and Environment toward Mr. Oliver Varhelyi the EU Commissioner for Neighborhood Policy & Enlargement Negotiations.

Commissioner For Environment, Oceans and Fishery

Head of the Delegation of European Union in Tirana

Subject: Possible infringement of EU law in the case of the Vlora Airport

Through this letter, we would like to express our gratitude for the European Commission towards our concerns raise round 3 years ago on the build of commercial airport in Vlora. In September 2018 we sent you a letter stressing that this project violated, in addition to domestic legislation, the Stabilization and Association Agreement, the EU acquis and the domestic legislation that approximates it as well as, in the following cases, the Agreement on the European Common Aviation Area (ECAA).

The government submitted to the Parliament a draft law on the construction of the Vlora Airport on 24 January 2018, which was approved only with the votes of the ruling majority through the accelerated procedure; the reason for such urgency was not explained. It is also worth noting that this draft law was not scrutinized by the Committee for European Integration, which is the responsible parliamentary committee for the approximation of national legislation with the EU acquis and the oversight of the implementation of the commitments stemming from the Stabilization and Association Agreement.

A winner for this contract was announced at last from Minister of Infrastructure Belinda Balluku on March 2021, after several failed attempts.

In your last Country Report this was also highlighted as a main issue “In December 2020, The National Territorial Council approved without proper public consultations the map of revised borders of the Protected Areas, where many protected areas were projected to be more fragmented and smaller in size, despite an overall total size increase.”

The construction of the airport will include protected area in the Vjosa – Narta Lagoon.  Dozens of local and international environmental organizations said it would cause “irreversible damage to the ecosystem of the Vjosa-Narte Protected Landscape.”

They have added that such an investment would bring uncontrolled and unsustainable development models that risk irreversibly damaging the natural value and resources of the area.

The Lagoon have a distinct and valuable character in its ecological, biological, cultural, aesthetic, and other features. It is also in the Albanian Protected Area Network, is an Important Bird Area, and a Key Biodiversity Area. It almost meets the criteria to be classified as a Wetland of International Importance. The government has even nominated it as a candidate site for the Emerald Network under the Bern Convention.

Also, the Standing Committee of the Bern Convention has called on the Albanian government to declare the Vjosa River and its surroundings a national park and reassess Vlora International Airport’s situation.

Albania is a signatory of the Agreement on conserving African-Eurasian Migratory Waterbirds (AEWA), which relates to 92 species found at Narta. More than 200 other species are monitored in the area, two-thirds of which are protected under international conventions, and tens are endangered.

Protection of the environment is as stipulation of the SAA agreement, which in Article 92 stresses:

“Cooperation shall aim to promote the modernization and restructuring of the Albanian industry and individual sectors, as well as industrial cooperation between economic operators, with the objective of strengthening the private sector under conditions which ensure that the environment is protected.”

“Policies and other measures shall be designed to bring about sustainable economic and social development of Albania. These policies should ensure that environmental considerations are also fully incorporated from the outset and that they are linked to the requirements of harmonious social development.”

Taking into account the above mentioned, the area is an important section of the “Adriatic Flyway”, in which hundreds of thousands of birds forage and take shelter during the migrations season. Birds like pelicans, herons, gulls, and flamingos are big enough to put the safety of planes and people at serious risk in case of collisions.

We have started collaboration with civil society on this issue, and the Chair of EU Integration Committee is asking his public scrutiny of this project. Under these circumstances we kindly ask you to investigate the case according to the respective procedures.

We remain at your disposal to provide additional information and clarification, if required. Thank you again for your attention and the interest shown,

Chairman of the Committee on European Integration

Deputy Chair of the Committee on Productive Activities, Trade and Environment