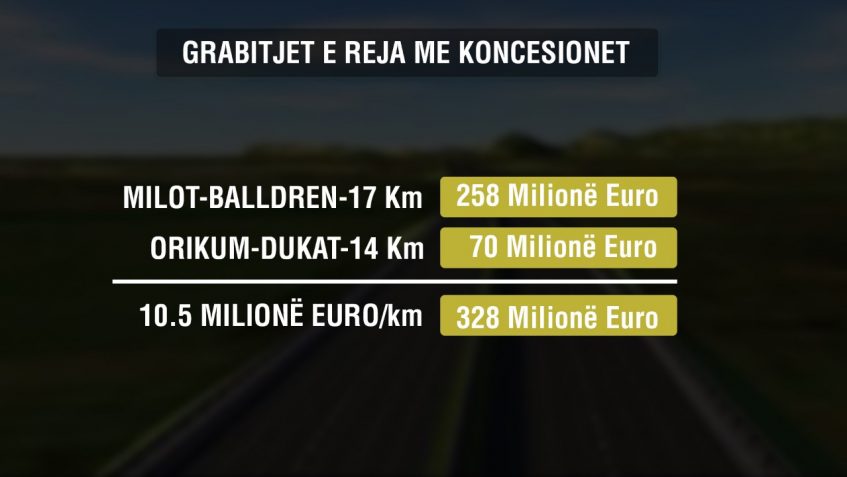 The Milot-Balldren (worth 296 million Euro) and the Orikum-Dukat (worth 70 million Euro) road building PPP contracts have been denounced several times by the Democratic Party (here) as the largest robbery of the public purse of 30 years of Albanian pluralism, a robbery through special law.

Their cost per kilometer is 17 million Euro, representing the double of the World Bank reference standard for similar roads.

Several laws and procedures were violated through a single contract (no competitive bidding) and the initial 113 million Euro cost estimate of Milot – Balldren was inexplicably inflated to 296 million (here). The contracted company doesn’t fulfill any legal criteria and the bank loan repayment clauses are illicit.

The President returned the approving law to Parliament citing among other things that the only reason the unusual government decision to  send this contract for parliamentary approval seem to be evading criminal responsibility (here).

The State Supreme Audit in an official letter to Parliament prior to the vote asked to suspend the procedure citing legal violations and “an unjustifiable loss of much tax money” (here).

The Opposition said it will hold criminally liable all involved decision makers and the company owners-managers and called on the banks to refrain from giving them loans.

Two weeks after the parliamentary approval of these PPPs the Tirana representative of the International Monetary Fund expressed criticism and concern (here) about the project, the unsolicited procedure and budget implications. The IMF, the European Commission and Parliament have often expressed similar concerns in the past.

The SP-controlled parliament has thus passed two laws that virtually give 366m Euros to Agim and Ndue Kola (ANK), as well as to Lorenc Gjikuria (Gjikuria shpk), for poorly prepared and inflated projects.

But what happened precisely and in particular with the big Milot-Balldren PPP € 296 million contract?

This project represents 17m Euros of taxes for 1km of road, twice the average World Bank standard. Albanians will have to pay 296m Euros (vat included) for a road originally designed for 113m Euros.

This is a flagrant breach of the rules of fair competition, and a clearly illegal way to operate outside the regulatory legal framework in order to privately negotiate with the chosen company. Items that were not included in the tender, such as bank interest, were also negotiated, which is not allowed by law.

Normally the loan repayment would be 70 million and the bank interests, but unlike any normal loan, in the case of this contract, such amount is not counted on the principal but on the total amount. And only this effect will cost 6.4 million Euros more to taxpayer’s money. So it is the state that is paying the interest rate, leaving ANK without any risk as the state is paying off a loan that it could have taken itself.

Albania is on the brink of economic collapse, while the $ 1 billion PPP project is being used to launder money, to steal, and to extort citizens in the name of illicit enrichment. This program has generated the highest costs per km of roads, which in the case of new “Tirana Ring Road” scandal, went up to 22 million euro/km, and here up to 17 million Euros per km. The opposition calls for the immediate stop of this giant corrupt scheme.

The PPP contract in question, along with others, will be the first to be re-assessed through the lenses of the Anti-Mafia and Anti-Oligarchy Law proposed by the DP.