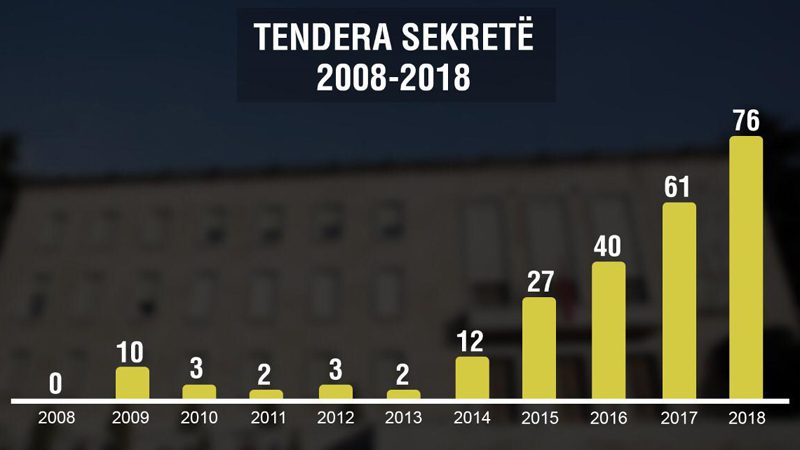 The Albanian Supreme State Audit Institution report for 2018 shows that the total amount of government misuse of public funds reaches a record high level of 1.7 billion euros. Out of this sum, 923 million euros is the economic damage from uncollected government revenues and 587 million euros are due to misexpenditures relating to public tenders.

The record level of public concessions and PPPs developed by the Rama government appear to be of significant importance. Beyond their impact for the public future debt exposure, the procedure and the amounts involved in these concessionary and PPP contracts, raise important doubts as of their transparency and tue economic rationale.

Up to now, a limited number 19 companies owned by 11 government-backed oligarchs, have won 2.100 bids equalling to 263 million euros. Over 630 public tenders have been awarded through a direct negotiation procedure without announcement.

According to data from the Public Procurement Agency, the 11 government-backed oligarchs denounced by DP have benefited 242 public tenders during 2018, equaling 3.6% of the total number of procurements for a total of 52 mln euros or 7% of the total value of procurements in 2018. 34% of these tenders were made in the conditions of one sole competitor for the contract, which clearly says there was no competition at all. Out the remaining tenders, 65 were directly negotiated procedures without announcement worth 6,3 mln euros, representing 15% of the total negotiated contracts value of 2018.

In the meantime, according to comparative data, Albanians pay more taxes than all neighbouring countries, while receiving a lower income and facing higher living costs. The fiscal policies of the government since January 2014 have been pro-monopolies and against free market competition; the law of strategic investments or the new draft law on the Albanian Investment Corporation, do not help entrepreneurship or FDIs, but non-transparent corruptive and anti-constitutional large financial & infrastructural projects.

The decrease of bank savings has become more apparent, considering that nearly 4% of Albanians account for over 57% of the total bank savings. In parallel, salaries have remained stagnant in these recent years albeit all statistical data confirm, in contrast, that product prices have increased. According to the Central Bank of Albania, 26% of households have debts and 30% have received informal loans to support their daily needs.

Data from the statistics report show that Albania does not have policies relating to salary increases in both the private and public sector. According to the state budget, wages in the public sector have had the lowest growth since 1993. Which translates in terms of growth, that in 5 years of socialist government, the wages increase is equal to the rise after 50 years of dictatorship.

This is why Albanians spend today most of their income to be food and daily consumption items, especially with the purchase of bread, according to EUROSTAT / Monitor data.

But we are facing neither an increase of the formalized economy, nor an increase of revenues as a result of fiscal policies, or an increase of employment and economic growth. On the contrary, according to data and studied of the Central Bank of Albania, consumption has fallen in relation to previous years, which is confirmed even by the revenues in the budget.

As comparison, Serbia, which has the same tax burden, collects a record regional level revenues, expected at 41.8% of GDP for 2019.While Montenegro is at the level of 40.1% of GDP in their 2019 draft budget.

Public Debt of Albania compared to the region:

Business crediting has fallen by 180 mln euro – confidence in the economy has fallen at worrisome levels as Albanian economy has stooped circulating its capital in an effective manner, in order to provide a healthy economic activity. 78 800 small businesses have stopped their activity since January 2014 until today. Over 60 businesses close every day starting January 2014.

The American Chamber of Commerce, the German Chamber of Commerce and the Albanian one, have officially complained about this situation, including relating to high taxes, non-pro-business fiscal policies that produce inequality and the non-transparency of PPPs. Similarly, businesses declare that they suffer from the non-reimbursement of VAT though the government has increased public debt after the financial deal made with the IMF in September 2013. Liabilities to businesses reflect indeed still very high level. In January 2019, the IMF accounted these liabilities up to 300 million euros.

Such situation is also confirmed by an U.S. State Department report underlines that Albania’s climate is not pro-business. The fiscal policies of the government since January 2014 have been pro-monopolies and against free market competition; the law of strategic investments or the new draft law on the Albanian Investment Corporation, do not help entrepreneurship or FDIs, but monopolies and untransparent large infrastructural projects.