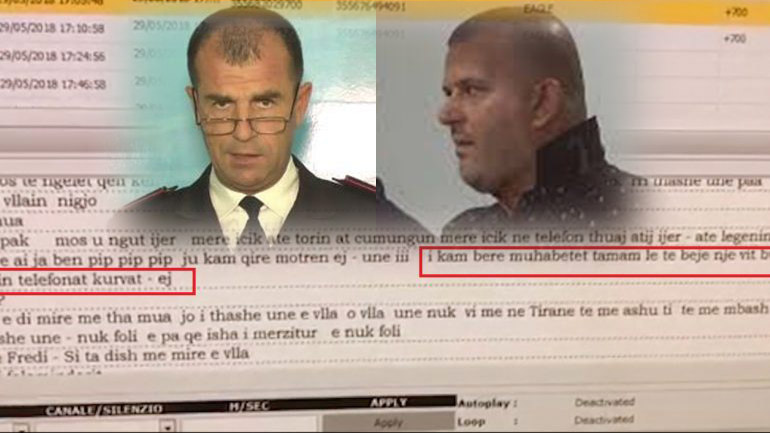 In this link, a detailed review of the materials enabling a full picture of the Xhafaj scandal, a ghastly abuse of power and political pressure that has led to a travesty of justice, convicting the denouncers of a crime while protecting the alleged authors of the crimes.

For a synthetic version, please read below.

The Democractic Party of Albania, published on May 2018, a series of documents confirming that Agron Xhafaj, the brother of then Minister of Interior, Fatmir Xhafaj, was condemned for international drug trafficking by an Italian court on 2013.

The opposition proved that he was not being extradited, and was living freely in Albania, due to the illicit protection granted by his brother Minister (read facts 1 here). Xhafaj’s protection of his brother went as far as falsifying official legislative documents relating to a parliamentary amendment of the Criminal Code, so he could protect his brother of being deported (read facts 2 here). Opposition representatives proved finally that Agron Xhafaj continued to be involved in criminal activities and that he was again benefiting from the active protection offered by his brother, Minister of Interior (read facts 3 here).

Newly revealed phone interceptions prove that Senior Police officers, High-level Socialist MPs, and Prosecution Representatives, they have been all jointly involved into bribing, forging and promoting a false testimony alleviating Xhafaj’s position, once the DP made public the above presented facts.

These circumstances are undistinguishable from the Tahiri scandal. In both cases, two consecutive Ministers of Interior of the Rama Government appear to have directly supported family-linked criminal organisations from the city of Vlora involved in drug trafficking to Italy.

The recent developments of the Xhafaj scandal, reflect the deep and worryingly collusion between organised crime and public authorities under Rama’s government. The criminalisation of the Socialist Party, the surge of drug trafficking, and the vote-buying phenomenon through these gains, are all part of a unique political criminalised framework: under Rama’s government, Albania has become a rogue authoritarian criminal regime where no free-elections can be held.

October 2017: A journalist investigating the drug trafficking, managed to record a conversation featuring the brother of the Minister of Interior at the time, Fatmir Xhafaj. Minister’s brother, a fugitive from Italian justice where he was convicted for more than 7 years for drug trafficking, is heard making arrangements for the transportation of a drug shipment with one of his former collaborators.

The journalist sent the recording to the opposition after the media refused to run it.

May 14, 2018 : Democratic Party publishes the audio talk about drug trafficking.

May 16, 2018: Albanian Prime Minister, Edi Rama, denies the allegations that one of the participant is the brother of the Minister of Internal Affair. The Prime Minister accused DP of manipulation.

May 28, 2018: The head of SP parliamentary group, Taulant Balla, states that the person in that tape is not the brother of the Internal Affairs Minister, but rather an actor.

June 28, 2018:  The media near Government claimed that the Prosecutor’s Office was approached by a person, who claimed to impersonate the brother of the Internal Affairs Minister on that tape.

March 8, 2019: The Prosecutor’s Office calls in as a defendant  the DP deputy, who denounced the whole conversation and the journalist who conducted the investigation, stating that the intention to politically damage the Government was the only motivation.

22-25 March, 2019: Audio-wiretapes, conducted by Prosecution, are published. These non transcripted and unreviewed interceptions, claim that Fredi Alizoti (the false witness) has spoken several times with politicians of the SP ruling party, different chiefs of police, as well as with prosecutors of the case.

The following interceptions prove that:

Briefly, some of the official interceptions of the prosecution, as follows:

The false witness affirms a fellow that he is willing to go to prison in exchange for the reward he has been given.

Fredi (false witness): “I made the deal right. I will suffer a one years prison sentence and geti in return what’s mine”.

The false witness affirms the Chief of Police for the city of Fier (the birthplace of the witness), that he will meet with the leader of SP parliamentary group, Taulant Balla.

Fredi (false witness): “The deal is done. Listen, in five minutes the Police Director is coming. I got a good package”.

The Chief of Police begs the false witness to contact the Prosecutor.

Police Director: With whom you’ll meet?

Fredi (false witness): Taulant Balla, brother… I’ve got some things to talk about.

The false witness ask the Chief of Police to meet with the big Boss who is abroad for the moment. On that day, the Minister of Internal Affairs, Fatmir Xhafaj, is on official visit to Croatia.

Police Director: “Tomorrow morning, as soon as you can, but no later than 10 o’clock, you should have your ID card and passport with you and go meet the prosecutor, Genti. Please. Let’s consider it done.

Fredi (false witness): The job is done I’m telling you not to worry about it.”

The false witness is expecting to benefit from the meeting with the Chief of Police.

Police Director: “Where are you?

Fredi (false witness): At the same place where you dropped me off that night, but I want to meet the big boss….

Fredi (false witness): I’m not having cold feet, what is done is done and I’m not stepping back.

Fredi (false witness): I am here and I want to meet him tonight. This is unquestionable.

Police Director: The boss is abroad, it is likely that tomorrow afternoon he will be here.”

The Chief of Police promises to send money to the false witness.

Police Director: “Where are you, in Fier or not?

Fredi (false witness): I won’t step back, what I started. Will you send me somebody to speak to?

Police Director: Yeah, I’ll send someone with the money.”