An escalating crisis and the risk for Albania to become an authoritarian criminal regime where no elections can be freely upheld. 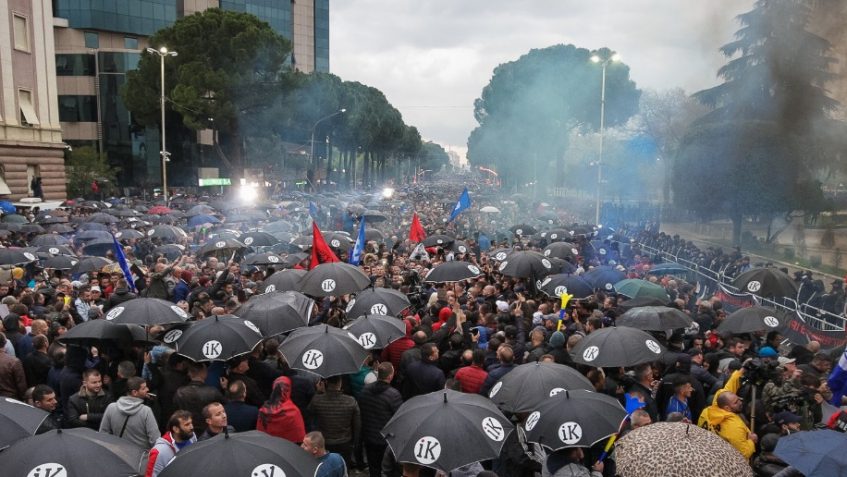 Albania is dangerously shifting towards an authoritarian criminal regime as organized criminal networks have successfully penetrated simultaneously among legislative, executive and judicial bodies. This unprecedented and extreme threat towards democratic standards, balance of powers and rule of law, finds its roots in the intimate and direct cooperation between the Albanian socialist ruling party and organized criminal networks. It is in this very specific context that the Albanian opposition has resigned from all electoral mandates and refuted to serve as a façade for any incoming electoral process.

The election to Parliament and to local Municipalities of individuals with serious criminal records (1) resulted in an intensification of criminal networks activity in drug cultivation and trafficking, due to the direct cooperation of the executive and the tolerance of the judicial branches (2), which in turn fueled furthermore the vote-buying phenomenon by means of criminal gains and illicit drug profits (3).

1. The criminalization of the ruling socialist party officials…

A) The credibility & independence of the Albanian legislative branch has been seriously affected by the introduction of numerous MPs with serious criminal records.

19 socialist MPs, with serious criminal records, have successfully entered the Albanian Parliament after the legislative elections of 2013. The selection and wining position of these 19 MPs, was due to a trade-off strategy thought by the socialist leader Edi Rama, who has the exclusive right to establish Party candidates’ list. PM Rama sought for their illicit profits in supporting the socialist electoral campaign, in exchange of a winning seat for Parliament. This unprecedented situation led the parliamentary opposition to boycott throughout 2014. The boycott ended on Dec. 2014 after EU intermediation and the vote of the “Decriminalization Law” which established new criterions as of the eligibility of candidates.

B) The criminalization of Albanian electoral processes has spread to all levels, including the election of Mayors with serious criminal records.

Following the 2013 legislative elections precedent, the socialist ruling majority proposed numerous candidates with serious criminal records for the 2015 local elections. Among these, the elected Mayors of Kavaja and Kruja are the most symbolic ones as they have been previously sentenced for serious crimes, including drug trafficking and gang rape, while having up to 5 different identities. Following the entry into force of the “Decriminalization Law”, more than 350 Mayors, City Councilors, Appointed Senior Officials, etc. have lost their positions due to their serious criminal offences. PM Rama, has continuously refuted these allegations and has publicly supported his candidates until today. This has produced a strong sense of impunity among these individuals who have continued their criminal & party activity even after losing their elected seats.

2. …is at the source of the drug trafficking surge in Albania…

A) Executive branch representatives have been directly cooperated with criminal networks in order to increase their personal and electoral gains.

During the first PM Rama mandate (2013 – 2017) Albania has faced an extreme surge of cannabis cultivation and heavy drug trafficking. It is believed that illicit profits from drug trafficking are worth 5 billion euros. In Italy alone, the seized cannabis in provenance from Albania amounted one year prior to the legislative elections of 2017 to 30 tons, compared to 11.3 tons in 2015 which was still a record number. This increase was due to the massive cultivation of cannabis plantations in Albania by organized criminal networks with direct support from political representatives, including from Police Forces, in exchange for their electoral support. Based on Italian interceptions and Italian court decisions, two consecutive socialist Ministers of Interior, Tahiri (MP) and Xhafaj (MP) have resigned as a result of their direct support to family members involved in drug trafficking. These interceptions show that part of these profits were used for vote-buying. The socialist majority refused to lift the parliamentary impunity of their former Minister of Interior Tahiri so he could be investigated without restrictions. The brother of PM Rama has also had links with an organized criminal network (German investigations) sentenced for running the biggest cocaine refinery in the Balkans.

B) The Judicial Branch has utterly failed to address the links between political representatives and organized crime networks, by being at occasions even a guarantor of these links.

No drug lord or high-level official was arrested, nor convicted, during the 1st Rama government 2013-17. The Balili case (known as Balkans’ Escobar) became a symbol of this impunity as he achieved to escape for more than two years albeit an international warrant. In addition, after the legislative elections of 2017, the socialist ruling majority unconstitutionally nominated a Temporary General Prosecutor (TGP) who reshuffled, unlawfully, the organization of the Prosecution Office. The TGP reshuffle targeted particularly those prosecutors who were dealing with investigations relating to representatives of the ruling majority and vote buying. Using the Justice Reform framework, the socialist criminalized ruling majority influenced the nomination of key individuals into the new justice institutions, by supporting individuals who had links with organized crime and with socialist representatives, were former communist prosecutors and members of ‘Sigurimi’, or were accused for corruption and unjustifiable sentences. In parallel to this, the Constitutional Court and the Supreme Appeal Court have ceased functioning for close to two years now, because of the unwillingness of the socialist ruling majority to adequately support the justice reform transformational process. The paralysis of the Constitutional Court has made impossible for the Albanian opposition to legally raise the challenges and threats posed to the balance of powers and rule of law in the context of the criminalized government and vote-buying phenomenon in Albania, including, to challenge anti-constitutional laws supporting oligarchs or altering land-ownerships.

3. …which in turn fueled the vote buying phenomenon through criminal gains.

A) The Albanian opposition has constantly proven the links between the increased criminal activity in the country and their noxious influence on electoral processes.

Albanian investigative journalists referred a massive example of vote-buying during the partial local elections held in the city of Korca after the legislative elections of 2013. Albeit the existence of a prosecution request on this case, the ruling socialist majority voted in parliament to amnesty all individuals involved in this electoral crime. Following this precedent, hundreds of factualized cases of vote-buying, vote-intimidation and vote-influence were reported during the following 2015 local elections. The same phenomenon was reported during the partial local elections held in 2016 in the city of Dibra. In all occasions, criminal gangs appear to have campaigned hand to hand with senior socialist representatives: use of large amounts of cash; use of weapons to threaten voters; use of state privileges to protect felons etc. A former Minister of Justice was sacked by PM Rama after publicly denouncing the political power and impunity criminals networks were benefiting under Rama’s ruling, let them be in terms of drug trafficking or vote-buying. As of today, not a single party official or renowned criminal has been arrested relating to these accusations.

B) The recent phone hearings cases certify, for umpteenth occasion, that no free electoral processes can be organized under the current socialist criminalized majority.

Voice of America and BIRN made an independent journalistic investigation that brought into light the existence of the “Prosecution file 339”. The file relates to more than a dozen of CDs containing thousands of intercepted phone calls between the Avdyli gang and the socialist Mayor of Durres, Ministers, MPs, and other socialist senior officials. The Avdyli gang was under surveillance upon the request of German authorities, relating to heavy drug trafficking, and were finally arrested based on the identified evidences. During the phone interceptions, it appears that the Avdyli gang has directly supported socialist officials into buying votes on their behalf during the 2017 legislative elections in exchange of public tenders, impunity and political support in their criminal activity. In this context, it shall be reminded that during the week preceding the 2017 legislative elections, and solely during that week, the euro/lek exchange in Albania felt at a record level, in unprecedented and unexplained manner. A second similar case, “Prosecution file 184”, proves that the vote-buying phenomenon in cooperation with organized criminal networks, has been similarly widely practiced in the region of Dibra during the partial local elections of 2016. A more recent file, relates to former Minister of interior Xhafaj and to phone interceptions of Senior Police Commander, Socialist MPs and Prosecutors, who have been paying in cash or influencing criminals to falsify their testimonials in order to defend Xhafaj’s convicted brother.

Taking into account all elements presented above, the socialist majority appear to have granted “a judicial impunity status” to organized criminal networks in their illicit activities, in exchange of their electoral support. In the context of the categorical refusal of the majority to adequately address this extremely serious concern for the quality of Albanian democracy & rule of law, the opposition’s decision was to withdraw from any parliamentary activity, including the resignation from their mandates and non-participation in the incoming elections.