AGREEMENT FOR THE POLITICAL COALITION OF THE UNITED OPPOSITION 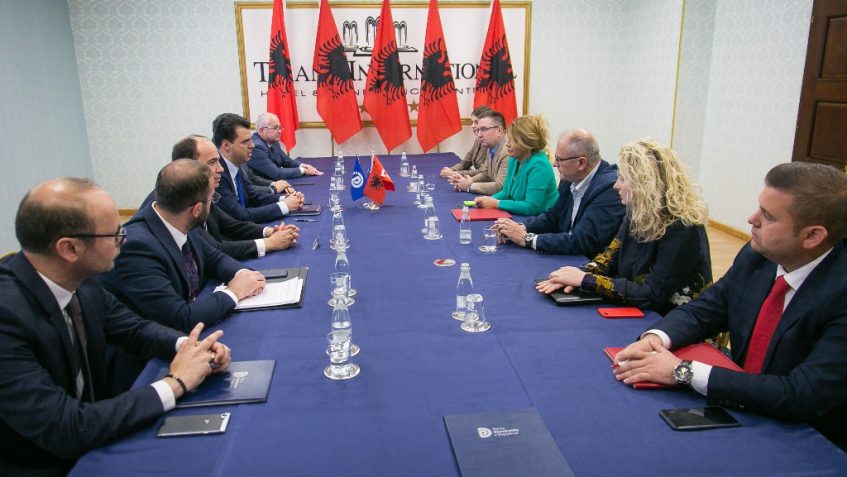 I. Deeply concerned that for a long time Albania has been under the conditions of:

o An increase of extreme poverty, unemployment, as well as life and property insecurity, which altogether have caused an extremely high number of Albanian citizens to emigrate to EU countries;

o The lack of Government attention to Albanian citizens’ daily problems, and the lack of reforms guaranteeing that the government is truly serving its citizens’ interests;

o The total loss of citizen’s confidence on rule of law;

o The annihilation of free and fair elections, a phenomenon proven by facts reported on a daily basis, having affected government legitimacy but also its accountability toward the citizens;

o The national economic collapse due to government-linked oligarchs, benefiting fraudulently from tax money, destroying free market competition and hindering foreign investment which could have been a large source for employment;

o The deep inequality between ordinary citizens and those with power, deriving from the annihilation of the rule of law and the equality before the law;

o The unprecedented Government efforts to control all powers in the country, including the justice system;

o The severe political crisis faced by Albania today, which makes impossible the organization of free and fair elections according to democratic standards, as it is now proven that Edi Rama’s government has collaborated with organized crime to buy votes;

o The destructive consequences of the undermining fair and free elections principles to Albanian citizens’ livelihood, to democratic processes and functioning of institutions, as well as to the European integration process for Albania;

o The unprecedented situation deriving from the economic crisis, the massive emigration and the catastrophic conditions resulting from the increased social misery, all as consequence of a government built upon a deformed electoral process dictated by the cooperation with organized crime;

o Edi Rama’s direct responsibility for the severe crisis Albania is facing today, and for the establishment of a criminal scheme in cooperating with organized crime to buy votes;

o The unprecedented absence of the Constitutional Court, of the Supreme Court, of an unconstitutionally appointed General Prosecutor, and lack or capture of other independent constitutional bodies, that should guarantee rule of law and protect democracy;

III. Considering that the current situation is primarily the result of the strong links between the Government and organized crime, as well as corruption, which hinder the socio-economic development of the country and the European path of Albania;

IV. Aware that Albanian youth is seeking more than ever, not only a qualitative education, according to European standards, but above all employment conditions based on merit and individual experiences;

V. Concerned about the severe challenges faced by the Albanian economy, especially, by Albanian farmers and small entrepreneurs, due to the government’s policies having led them to bankruptcy;

VI. Aware that the capture of public institutions by organized crime poses a serious threat to democracy and democratic institutions’ integrity and functioning, and that this situation has transformed into a national emergency in order to sever the government links to crime;

VII. Determined to undertake any political or institutional steps that paves the way for opening Albania’s negotiations with the European Union;

VIII. Estimating that the current Government and justice institutions have not taken any concrete effort to address the recurring issues of vote buying, of dirty money use in elections, and of the electoral engagement of individuals with criminal records, which have seriously undermined public confidence in the integrity of electoral processes;

IX. Estimating that the current Government has taken no steps to address state resources abuses, police abuse and dereliction of duty as well as the pressure on state employees that occurred in the past elections.

1. The creation of a United Coalition of Opposition and Citizens for the upcoming elections in the country.

2. The Political Parties signatory to this Coalition will register to participate in the elections only after the conditions for free and fair elections will be established.

3. The only course to guarantee free and fair elections is the formation of a Transitional Government with a special mandate to:

(i) restore the political legitimacy of government through early parliamentary elections.

(iii) adopting the electoral reform and pursuing its implementation, with a special focus on eradicating all links between politics and crime, fighting the vote-buying that has been massive and widespread as well as the intimidation of voters by criminals and eliminating the inequal treatment of political parties competing in elections.

(iv) creating a climate of trust with regard to the implementation of the justice reform free from any political interference.

(v) creating the necessary conditions that will accelerate the opening of Albania’s membership negotiations with the European Union and undertaking any steps and reforms necessary for this purpose.

4. In defense of democracy, free and fair elections, the Political Parties signatory to this Coalition commit not to allow any electoral farce, organized by the illegitimate government of Edi Rama.

5. Any farce election, dictated by the alliance of Edi Rama with organized crime and their dirty money, will be rendered impossible through the escalation of the opposition action all over the country.

6. We reconfirm our deep belief that Albania’s EU integration is the only way out of the prolonged post- communist transition. We express our full determination to take any necessary step to support of Albania’s irreversible and rapid journey to the European family.

7. We commit to adopt a Common Platform aiming to freeing the economy from the government-linked oligarchy and crime and oppressive fiscal policies. This nefarious trio is responsible for the peaking unemployment, the driving away of foreign investments, the increasing destitution of farmers and private entrepreneurs. The Common Platform’s aim is to end the current economic crisis, to create opportunities for employment, development, prosperity and equal opportunities for all.

8. We commit to uncompromisingly fight organized crime, corruption and money laundering as the main obstacle to the stability and the development of Albania as well as a serious challenge to the security of our country and of our allies and partners.

9. We support every citizen whose fundamental rights and freedoms are violated by the arbitrary actions of state institutions.

10. We are willing to engage in electoral cooperation with any individual, organization or political party that shares the principles and goals laid out by the signatory parties.

The United Opposition and Citizens Coalition mandates the Democratic Party of Albania, as the largest party of the Coalition, for implementing individual or collective agreements on elections with all signatory parties.

THE POLITICAL PARTIES OF THE OPPOSITION COALITION