The chronology: why drug traces lead to Rama 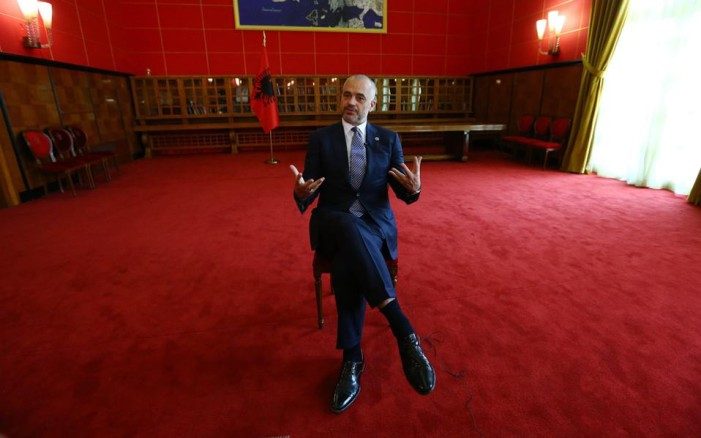 The former President of the Republic, Mr. Bujar Nishani, suggested to declassify the minutes of a National Security Council meeting which, according to him, would reveal many facts on the collusion of high rank police chiefs and drug dealers. He claims that the making public of this meeting, held in the office of the President in November 2016, could shed light on the current debate that divided the country into two camps, in those who say Edi Rama and his government were not aware of the size of the cannabis trafficking and those who believe that he is responsible, because he knew everything.
As it has been noted in public debates so far, the Socialists have avoided this request (of the former President), by hiding behind the “state secret” procedures and rules. They are trying to archive this filthy part of their first term.

But despite the approval or disregard of the provocative request of the former president, there is a simpler way to find the truth, and understand if Edi Rama intentionally camouflaged the cannabis traffic. There is no need to debate the declassification of secret documents or the procedure to be followed. To overcome this dilemma, it is required only to check the public archives. It is not a task that requires the implication of statesmen and spies, it can be done by a ordinary journalist and the most ordinary reporter. It requires only the burden to watch, one by one and chronologically all the reactions of Edi Rama.

It takes just a quick look to remind you of the statements and facts that from the current perspective look scandalous. A look of this kind clearly reveals that any time that was faced with indisputable evidence the Prime Minister has set up an enormous alibi just to deny the reality. Let’s get them in chronological order. When the opposition announced for the first time that the airplane trafficking of narcotics had started in the country, Rama said that they were small planes that were disinfecting Albania that Sali Berisha left full of mosquitoes. As a pathetic clown, he made these claims subject to anecdotes, showing how far his predecessor’s sick imagination could go.

But it did not take long and the first drug filled plane crashed in Divjaka. The facts were shocking. The plane had disappeared from the radars and no one had reported. The wide open forest close to the beach was surrounded by gunmen and the police did not notice anything. In addition, the plane with Mr.. Riformato on board, was loaded with cannabis. It is curious to open the archives and see how Rama reacted after this flagrant case. He appeared on the podium in the Prime minister’s office and created a whole conspiracy theory: How is it possible that the plane fell on Sunday? How is it possible at noon? How is it possible in the middle of the beach where everyone can see it? His message was clear: someone had crashed it in order to discredit the image of the government. And of course this was done by the opposition which had been trafficking drugs with air-planes whilst in power, and now, someone of them could order one of them to crash for propaganda reasons.

The same technology of putting the “lie factory” into operation, instead of investigating and deepening on the facts, was also seen in the “Zagani case”. When for its own reasons, -idealistic or not , this is of little importance today – this former police officer spoke about Saimir Tahiri’s relationship with Habilaj Gang, Edi Rama fiercely attacked the whistleblower. Again it is important to go back in time and open the video archives to understand how the prime minister behaved. Initially he forced TV News 24 to censor the two sequels interview with Zagani. Then just a few days later he organized a ridiculous gathering called “Anti-drugs actions, a success story”. He filled the Palace of Congress hall with policemen, and those who knew all about how Habilaj clan used the police department in Vlora, how they used the policewomen for their sexual desires, were told that the whistleblower was the drug trafficker and certainly not the minister’s cousins. So the message was clear: You should not follow Zagani’s lead’, instead you have to believe in the alibi that I am telling you.

The same identical story is repeated even when the second plane crashed in Ishëm, where “without been seen and reported by anyone” a clandestine aerodrome was built. If you see the reactions of Edi Rama in the parliamentary plenary session where the news for the crash of the second air-plane broke out; they seem ridiculous today. Instead of dealing with this scandal, with the airstrip that was built in the eyes of the police, he dealt with the opposition MP Noka and the question: “How did he know that the plane was crashed”? If you continue to observe this parliamentary session, the posturing of the Prime Minister are frightening. To the accusations of the opposition MPs accusing him of inundating the country with cannabis, he replied arrogantly:”The answer has been given to you by Donald Lu (the US Ambassador)! So that Albania is 100 percent clean from cannabis and the government has made colossal steps in the fight against drugs.

It was in this period, late November 2016 and beginning of 2017, that many of Rama’s imprecations were directed to whom was talking about a narco-state. According to him, those were the inventions of the “mud slinging machinery” and “pot media”. His propaganda and the fake news factory have for a long time been preaching a reality that did not exist. Ylli Manjani was dismissed as Justice minister only because he said that the situation was so alarming that the army had to be involved. Lefter Koka (minister of Environment) was publicly warned that if he repeated the same charges, he would be in the same situation as his colleague Manjani. Reality denial continued till the end.

It was only after the anti-mafia chiefs in Italy were forced to make public statements that the drug seizure on the other side of the Adriatic multiplied, only after the international press was persuaded to tell the truth, only after the secret services left on his desk the file of minister Tahiri and his police chiefs that had to be dismissed or reshuffled one after the other, only after four years of fraud, that Rama was forced to admit that cannabis was not an imaginary invention, but a battle that had to be initiated. He even went so far as during the speech for the presentation of the government’s program, thanked the opposition that opened his eyes to see this phenomenon.

With this he finally proved that for four years, he lied conscientiously and deliberately. Seen from today’s perspective, all his alibis have fallen. All the frauds that he articulated in public, lasted for only a few days, because they have always been devalued from a later fact. So, to understand how much Edi Rama knew about the involvement of his most prominent people in drug trafficking, there is no need for debating on the declassification of secret documents. There is no need for the former president or his successor to reveal the truth to us. This can be done by any journalist by googling the video archive of his editorial office. This can also be done by anyone: Just google in the key words “Rama” and “Drugs on You Tube. There you will see that any time a things were exposed the Prime Minister always exploded with imprecations for the messenger and has produced an alibi for the traffickers.
By Andi Bushati
November 3rd, 2017
Translated into English from