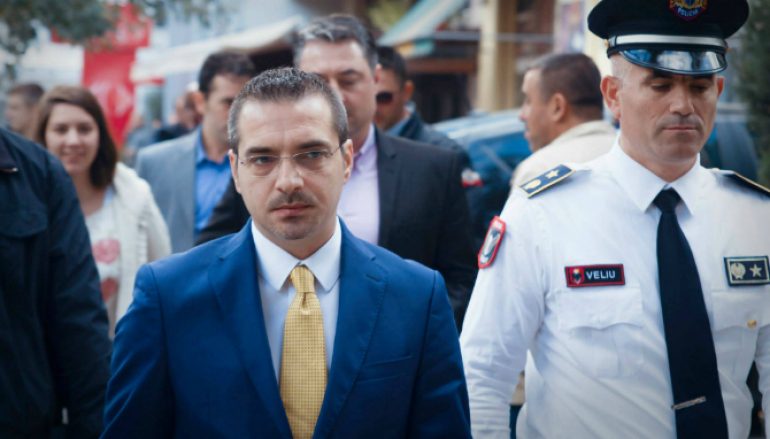 The Guardia di Finanza of Sicily has arrested on October 16th 2017, a group of 11 persons from Albania and Italy involved in a criminal organization specialized in the drug trafficking between the two countries. The group was headed by the Habilaj brothers, well-known criminals from the city of Vlora with a direct family link with Mr. Saimir Tahiri, former socialist Minister of Interior from 2013 to 2017.

The group is known to have trafficked from Albania to Italy 3.5 tons of cannabis that were seized by police (valued more than 20 million euros), but also weapons and hundreds of ammunition during the last four years.

The arrest is a result of a large investigation headed by the Tribunal of Catania (Sicily) and the publication of a 416 pages document based on several wiretapped interceptions, physical monitoring and other material evidences of the cannabis trafficking of the Habilaj brothers’ group. The socialist former Minister of Interior Tahiri is citied at several occasions during the interceptions having in mind that they start back on 2013 and at the moment Tahiri was Minister of Interior of the Rama government.

The interceptions confirm the accusations of former Albanian Anti-Mafia Police Commandant, Mr. Dritan Zagani who has been publicly accusing his superior Tahiri for his ties with the Habilaj brothers since early 2014. Zagani found out that the Habilaj brothers were using Tahiri’s personal car (an Audi A8 type) during their daily trips in the country, but also on several occasions to travel abroad. He also accused his local superiors for deconspiring police actions when targeting the Habilajs. Zagani was later accused by Tahiri for misconduct and convicted in prison. Due to the lack of evidences, Zagani achieved to gain his freedom on July 2015 and was granted asylum in Switzerland.

Since Zagani’s revelations and the recent arrest of the Habilaj group in Italy, Tahiri has publicly acknowledged that he had sold his car to the Habilajs on 2013 but without changing the property of the car which remained officially under his name. He has also publicly acknowledged that he has kept using the same car, even for travelling abroad, albeit stating that he had sold it. Investigative media also brought up pictures of the Habilaj brothers using Tahiri’s personal sport-boat.

The Italian interceptions, made public and available online, prove the strong link between Tahiri and the Habilaj brothers. On several occasions, the Habilajs cite Saimir Tahiri in person while taking proud in their ability to control local policeman in Albania, to interfere in the naval Albanian radar system or in their contact with the “big boss” himself.

In the light of the arrests in Sicily and the Catania’s tribunal interceptions, the Albanian Prosecutor sent an official request to the Albanian Parliament on Thursday, October 19th in order to seek Tahiri’s parliamentary immunity to be lifted. After having declared that he would support a free and rapid investigation, Rama’s socialist party made a surprising turn by accusing the Albanian prosecutors they were politically driven in their request. The prosecutors were also object of inappropriate accusations relating to their origins made by media close to the government. A pro-Tahiri rally was held in front of the Parliament and during the works of the Parliamentary immunities commission. During the rally, an independent journalist was verbally aggressed and threatened by Tahiri’s supporters when she addressed him a challenging question on the affair.

Finally, the socialist members of the Parliamentary immunities commission voted on October 21st against the lifting of Tahiri’s political immunity.

On Monday, October 23rd, PM Rama made a personal statement accusing the Prosecution office that their case is based on “worthless sheets” from the “stone age”, media accusations and not facts and proofs. He officially stated that he and the socialist parliamentary group would vote against the immunity lifting at the incoming parliamentary session on Wednesday 25th.